“remember that those who came back physically alive did not come back whole.” 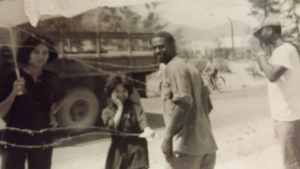 “Dose’s” picture has been on my dad’s nightstand for as long as I can remember.  A grinning boy that I’ve finally grown old enough not to see as “one of Daddy’s buddies” and thus an elder but as the boy he was who never got that privilege of being an “elder.”  He would’ve been just over 70 this year had he lived.

Dose prophesied to his boys that he would not return home from their tour of duty alive.  None of his brothers had lived through their 20s he told them and neither would he.  Before the company shipped out, he was working on a tank whose brake was not properly engaged.  It rolled over him as he worked; he lived a day or two without much of a head, my father recounts in his typically graphic reflection.

The grinning boy that never became a man…