Every seven years, all the cells the body has been are gone; replaced. Every seven years we become completely new beings. Which may mean there are two tick marks before Nine Tee will be a name or a tick and Nat-Turner-Nate more tickle than pinch. 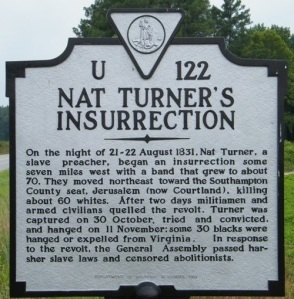 Playing around with fiction for #nanowrimo and this is what I got.  Maybe there’s something here but it’s murky to me.

I was syrupy over Nate. He talked fast and read books about plants, the cosmos, comics. On a blerd type groove I had no experience to reckon. I nicknamed him Nat Turner because I thought all that as revolutionary then. Alternative to all things status quo for a brown working class kid in Cambridge. And he made it look worth it. I can’t say he had any remarkable beauty. He just had that magnetizing otherness thing. I suppose in the circles he rounded, he wasn’t That Dude but I wasn’t in those circles so he was what I saw: That Dude.

I saw Nat Turner in Nate.

I sent him one of those

this could be us but you playing memes once. It featured the iconic—if you’re into black revolution type stuff iconic anyway–Gloria Richardson and her husband standing behind her guiding her grasp of a gun. Nate was into military strategy. And Black, Red, and Brown resistance movements. Nat Turner fit.

He girl-you-crazy’d me. And we went on being goofy and honest with each other. I imagined it would go differently.

“Different” is always formless, breathless so I got what was expected. Besides it was February; I was bored. Dude 88 had recently and carelessly made himself a tick waiting for two more of him to make that ubiquitous ticking grid. Eighty nine. And Ni-n-n-ne. Tee.

Winter is a long season.

Nate is half a decade in absentia. But, it’s Nat Turner’s birthday. (The real one). So Nate crossed my mind or more like sauntered through, found his way to the curb and sat on it to chill and watch the cars pass.

Nine Tee is hanging on. Not by that thin of a thread—a first. There were false flags of poor telephone call returnage, a history of refusing to live alone, and the dog—damned dog—but they blip so light on the radar now that they exist in a galaxy far, far away called Dating.

Here on Settled we don’t sex like rabbits—okay maybe kind of—or send rambling texts about minutiae—kites not needed. Well shoot, even that isn’t altogether true either. But we are past no-name smitten. Thicker than syrup too. And branded: A Couple.

Crushes come. Nem gwan. Some Thing worth keeping, committing Settled with comes along. Nine Tee is five years post-Nate; post Dude 88. Not full on blerd, which years and experience have confirmed is my type. He bikes and boards and is full on revolution because he ignites the fear of Gawd-uh in the one here. Fear because I’m wondering how you make syrup thick as coconut cream? Where, in this tragic city, do you learn that lilt of a walk with which you carry yourself through it? And carry it, still, to me? I respect little. And men like Nine Tee and Nat-Turner-Nate are slippery in hands like mine. But he’s here.

Every seven years, all the cells the body has been are gone; replaced. Every seven years we become completely new beings. Which may mean there are two tick marks before Nine Tee will be a name or a tick and Nat-Turner-Nate more tickle than pinch.

A solar eclipse and an unusual atmospheric event are believed to have inspired his insurrection, which began on August 21, 1831.

I read this and start searching for dots to connect. They are so pale they’re near transparent. But there are some.

To Be Continued (or Deleted)…