Portrait of the Artist as a Young Woman – Age 27 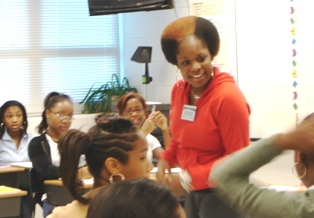 My boy Solomon called me his “little Assata.”

“When I met you I thought you were Muslim; you always wear long skirts?”

At the time we met, my appearance and attitude led to more than a few comments like that.  Frankly, it was pre-Jill Scott but post-Erykah Badu who was way far out and post-Lauryn Hill who was as much trend as truth.  (So was I probably).  So I think that context had everything to do with the perception of those around me.

But one thing I was serious about was my love of the Cause and the Kids.  I wrote poems about it ad nauseum.  But I would get so tired sometimes.

Solomon would encourage, “Come on baby–we need you for the Revolution.”

These are the kind of stories that would wear on me:

I was invited to a local public high school as a guest artist.  The instructor had read my work and was excited.  Which made me excited.  Students were rarely sure how they felt about a “poet” coming to their classrooms.  Their apprehension was usually apparent as I entered–they didn’t know what to expect.  But you could tell what they were expecting wasn’t me!  The teacher started with my bio.  When she was done, one of the boys said, “Oh, like White Girl?'” The rest of them–all Black–nodded, laughed in agreement.  So did the teacher.   She’s White.  I articulated my confusion.  She explained that they were referring to a high-achieving Black student in the class who wasn’t at school that day.

After the reading I had them write their own poems.  They were eager, which admittedly, I hadn’t even expected.  As they wrote in silence, she told me of her amazement–“They never write.  I hardly ask them to because you know they’re below grade level; you know, because this is a special ed class.”  She reminded me, in between her shock at their work in our next session, that these were special ed students who “couldn’t write.”
***
Part of the English curriculum at the university where I was teaching was to have students study at least one full length nonfiction work by an African American author.  I chose Assata.  Initially, I had a hard time getting the bookstore to stock it.  And since my students saw 4 page essays as long, there was no convincing them that an entire book was not going to be entirely too much.  The unit had them consider a time in history that is often overlooked–just beyond MLK’s Civil Rights and just before the post-racial era we’ve assumed.  A few students read the initial chapters and joined the discussion on the first.  As the others listened to the discussion, they asked me if the book was fiction.  ” So the FBI really tapped MLK’s phone? And these Black Panthers you talk about–they were our age?”  At the end of the course, which has never happened since, I received thank you emails.  “Thanks for teaching us about ourselves,” said one.

These were my “matches:”

EVEN THE ROCKS CRY OUT

my vcr buzzes: berkeley is the promised land.
progressives litter aisles, cover the doors like a plague,
talk about justice for all and liberty from undeserved suffering.
activists talk of travels toindonesiaand lands where butterflies don’t rest easy,
die in their cocoons or emerge for a life short in time, short of activity, legacy.

i am in love with cornel west again this morning;
each time i hear him—from philly or berkeley—i am unsettled.
that gotta do something don’t-care-what, just something urgent

like another date with a man who makes your voice drop,
your stomach drop, your heart stop, makes the world seem all new to your eyes.
and you are energized.

on richmond’s southside, twelve year old boys litter the local carnival with cell phones
shuffle in loose pants, hair separated by lack of care, ready
to fight another boy who has disrespected them.  i overhear without trying.
hands free for the battle, wings tied down by labels they knowingly and unknowingly wear:
‘at risk’ or ‘disadvantaged’ or ‘urban’ paired with ‘polo,’ hilfiger,’ and ‘fuck you,’ i mean ‘fubu’
in poorly planned outfits.
eventually the police will call for their ransom.

i wish i didn’t care.
can’t deal, i say,
but something makes me stay, gather stories and complaints
of midnight street fights that smear blood on my front door,
bass rattling souped up cars and porches of the unemployed,
and little girls dressed—or more like undressed—like whores.
something that hails from d.c., philly, baltimore, new york, hampton roads, and chicago,
compares notes about whose home is more ghetto,
with lips covered in dark shadows their cheeks and chins are still trying to find.

*STARING INTO THE SUN

say motherfucker they say.
the one thing they remember about
hammad, peace, being—what it means
is an obscene word.

they confess confusion.
some days, not like this one, i believe them.

like looking into a bright light that’ll blind you;
drawn to it nonetheless,
i expect, eventually, to find the end of their tunnel.

this morning i am not hopeful or understanding;
am feeling mean, wanting to inflict pain with my pen,
bloody their refusal to be saved
from a status quo that has more room for them
inside vials, cardboard boxes, or between hustles
than the tight cells of their dorms.

i was eighteen once.

many have not come this far with me.
we thought the world was ours;
talked about death
and dying as if
it could never happen to us,
jumped in without testing

as if we would be young and virile
searching for truth
that way
forever.

two hours later,in the computer lab
lab monitor macks on the phone
for addressing printer problems,
paper jams and shortages.
she slows for the chase according to his
pauses; no disconnect from her end.
my back to him, i concentrate

on all 5’4 of him distributed into
a deliberately deepened echo.

generational amnesia spring cleaned
the awkward parts recycled before me.

they type papers and lean into screens:
grit-fed girls giggle loud, wiggling round hips
in soft chairs, proclaiming their penchant for proofreading,
debate the nas, jay-z hip hop jihad and play with new-age toys.
he is oblivious. concentrating on being eighteen.
i’m just trying to concentrate.

*”Staring into the Sun” eventually morphed into a new poem of the same name which you can read here.