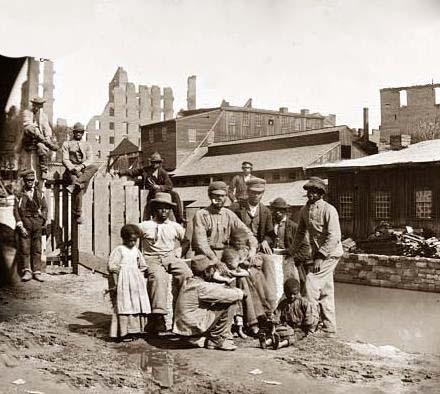 The ghosts, a friend warned me, would visit.  She advised me to keep pens available, to light white candles.  I already had a few pens and mackin’ lights—well, I lit candles but they weren’t necessarily white.

I was almost eager to meet them when I first moved in.

So far I have met a few but never in that haunting interesting fodder for stories kind of way.  Just kind of like yesterday.  Inside an out no-damn-where-daydream.  Which, by the way, occur when I’m driving to and from work, browsing the aisles of Target, talking on the phone about any ol’ thing to any ol’ body.   Not necessarily in the middle of my living room which faces the auction block now known as the 17th Street Farmer’s Market where goods are still bought and sold (just not necessarily of the human variety except maybe on weekends around 2ish when the clubs that dot the block close).

So the daydream came out of nowhere; this much I know.  It was not borne of the advertisement analyses I was grading in the middle of the living room floor, nor of the hugging bears painted on the comforter beneath me.

I was courting.
My skirt was a bustling bunch of heavy but I didn’t seem to notice it as I skipped around poles, peeking left then right to blush at him.  He was dressed in period clothes too; I can’t describe them, but he was not out of place.  We walked and flirted down the cobblestone promenade toward what is now Loving’s Produce and on toward big-porched houses and evening dull grassy yards.As we moved from the market area toward the residential, he noticed white men in Confederate uniforms on horses.  My heart raced.  We were in a trouble I couldn’t figure out in my 21st century mind.  But it continued wandering trying to find out for me.  I didn’t have “papers.”  He didn’t have “papers.”  Our courting was forbidden.  I want to make up a reason why because my daydream didn’t include that answer.  We hid under one of the porches and tried not to imagine—I was scared enough to imagine—the punishment that awaited us.  We held hands.  His were sweaty.  Mine were steady.  I seemed to have been prepared for the possibility.  I imagined the weight of him knocking me down as I pulled him down from a tree.  I imagined mourning him until I was barren, gray, and bent.   I imagined these things with my eyes open y’all. I felt them until exhaustion.Or maybe that came from the running.  We split up, ended up in a countryside.  Nightfall somehow found us together again.  Thankful but not yet convinced.  I don’t know the end of the story.  It didn’t come to me. Today, though, I went over it again and again in my mind.  What was that?  Who are those people?

Still scratching her head,
Me