Churches held us in parentheses on each corner. A white Lutheran church no one that I ever knew had stepped in. That congregation’s bell rang as we were eating Sunday breakfast and they were usually in and out of the hood before the Baptist church’s organ began the processional of our neighborhood elite: clergy, teachers, grandparents. 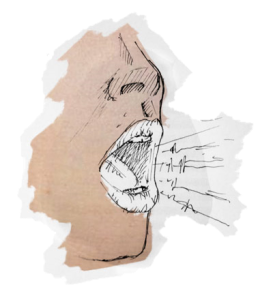 The admonitions never made him hoarse. They were white noise: part of our neighborhood’s rote cacophony. Whodini blaring from boom boxes; giggles, yells, and feet slapping ground of neighborhood kids.

Churches held us in parentheses on each corner. A white Lutheran church no one that I ever knew had stepped in. That congregation’s bell rang as we were eating Sunday breakfast and they were usually in and out of the hood before the Baptist church’s organ began the processional of our neighborhood elite: clergy, teachers, grandparents.

Maybe it was also the sense that his admonition was redundant.

There’s a Bible story we learned in Sunday school. The A.M.E. church where we learned it was just around the corner, just outside the parentheses but still in the paragraph. The story told about the prophet Jeremiah who walked all around Jerusalem seeking a just man.

Later in school we learned the myth of Diogenes. Diogenes wandered around the city-state of Corinth in ancient Greece with a lantern seeking the same.

sometimes when your breath plumes in the frost
it takes the roaming shape of Diogenes
with his lantern, seeking one just man;
so you end up scrutinized from behind the haw
he holds up at eye-level on its twig,
and you flinch before its bonded pith and stone,
its blood-prick that you wish would test and clear you,
its pecked-at ripeness that scans you, then moves on.
Seamus Heaney

Despite being anomalies, the cacophony of lives must have reduced them to white noise too. And yet, we are told that like our neighborhood wailer, they pursued their quest in earnest.

Midterms just ended and I got to spend some much needed one-on-one time with many of my students. This semester’s schedule is full of fresh faced 18 year olds transitioning into the adults they are expected to become: prompt, responsible, achievement driven in as much as achievement is determined by numbers and status. They’re poor on most counts. We talk about those tangibles: come to class on time, stop missing work and earning zeros. That is probably white noise to them; their behaviors suggest it is. But I’m not convinced.

They know better than their behaviors even if they don’t practice the ones we want.

When we meet, we discuss intangibles like their goals and especially their passions; their confidence in following them; the overwhelming noises that drown all that out. Like those wailers. Who continued their quest in earnest.

It is possible and probably true that there were just men among the masses of Corinth and Jerusalem. That the admonition to repent was convicting some adulterer, alcoholic, gum clicking sass-er in uptown Milford. The white noise of life can make it easy to lose track of the sounds; hard to recognize or respect individual voices. And then what? Well then don’t we all become the masses? Don’t we all become residents of the doomed city of Jerusalem?

“Before I formed you in the womb I knew you, before you were born I set you apart; I appointed you as a prophet to the nations.” God to Jeremiah
[Jeremiah 1:5]

Maybe we do. But it seems as worth it to use your voice anyway. I mean, if the city is doomed; why go easy into that good night? Audre Lorde pointed out, your silence will not protect you.

“It is never without fear — of visibility, of the harsh light of scrutiny and perhaps judgment, of pain, of death. But we have lived through all of those already, in silence, except death. And I remind myself all the time now that if I were to have been born mute, or had maintained an oath of silence my whole life long for safety, I would still have suffered, and I would still die.”      Audre Lorde

My grandmother used to say “Water seeks its own level.” Maybe, then, if you are that one just wo/man you will find more among you as you travel with your lantern. Lighting the dark; peering into the crevices; admonishing and offering, you will attract and find the others. They must be out there, right?

2 thoughts on “Water and Wailers”