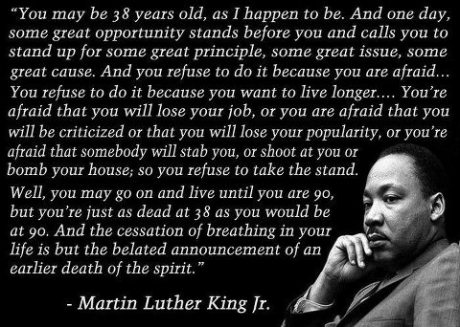 I’m almost 38, so in that regard these words from Martin Luther King seem apropos.

In these months before my 38th birthday there are some things that are going to happen that will be uncomfortable; things I’m anxious about because I recognize already how uncomfortable they will be.  Shit with my employer and career; shit with pervs and legal proceedings; shit that requires me to speak up when I would rather crawl under a rock and make my home there.

I view myself as confident and fairly straight no chaser.  But that’s mostly within my comfort zone if I’m honest.  I’ve been a victim many times of my fears, an anxiety that is as palpable in my behaviors as it is discreet to those around me, even to me.

The fear has never earned me anything, not even a decrease in anxiety.  Instead it grounds me where, maybe, I might be able to fly.  Or maybe I would’ve fallen flat on my face.  But as playwright Samuel Beckett says, that would be an opportunity to try again and “fail better.”

This is something I would write, really; have probably said before in so many words.  But 37 and half seems as reasonable a time as any to be reminded it’s time to live it.  At all times.  In all places.