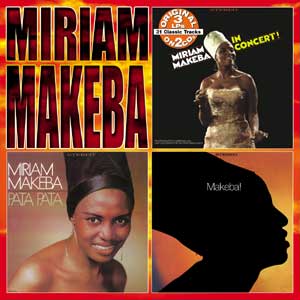 Miriam Makeba, South African singer/activist/conjure woman, has transitioned at the age of 76.

I’m not anything close to the biggest fan of her music.  I only remember listening to one of her songs songs ad nauseum a couple of years ago—can’t even remember its name—that was especially good for getting it going on the elliptical machine.

But Makeba’s life, more than her music, was an inspiration and challenge to me.

The media can hardly be trusted in the connections it makes or implies.  Nonetheless their reports of her death say that Makeba suffered a heart attack after singing “Pata Pata” (a seriously danceable track I do happen to know) at a benefit concert in Italy for the writer Roberto Saviona.  Saviona’s life had been threatened by the Camorra, (a “mafia-like organization” according to Wikipedia) for taking a stand against the group in his writing.

Perhaps what is most obviously inspiring about the whole scenario is that Makeba died doing what she loved to do.  Most of us who work for a living are probably guilty of working to make a living instead of just living and letting our life’s interests and passions determine what we call our “work.”  As in: I enjoy nurturing the few plants who have chosen to live and thrive under my care, but I might not take as kindly to the task if I had to do the same for an entire field for no money nor the benefit of my labor (also known as slavery or its euphemism, sharecropping).

More inspiring—and challenging—to me is what Miriam Makeba sang about.

Makeba was exiled from her home, South Africa, when her lyrics denounced the apartheid system under which the country was ruled; her passport stamped Invalid.  I have a manuscript whose absence from the public market is my own evidence that it is quite a challenge to produce and share art when times get tough.

If anything is demanded of hope, it is her kind of balls, like how she would  sing her truth even when it was banned in her own country; courage and persistence to continue encouraging us to dance “Pata Pata” even when she could not dance in celebration for her mother’s life having been barred from the country and unable to attend her funeral.  Miriam Makeba watched three band members die when, after a car accident, paramedics only took the white victims to the hospital.   And she still sang.

She sang because she knew that silence gives consent.  So you should never give in to it.  No matter what.  You don’t have to shout, but say something.  Sometimes your actions, like Makeba’s life so much more than her music for me anyway, can be that something.

One thought on “Miriam Makeba Makes Her Transition”