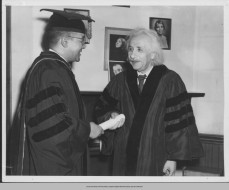 It is no secret that J. Edgar Hoover’s F.B.I. kept surreptitious files on individuals and groups considered to be threats to the country’s security—that is, the status quo of have and have-nots.  That “security” would be maintained at all costs—lies and murders were not above the measures taken.

Among those in the files were African American, Indian American, Asian American leaders and groups like AIM (the American Indian Movement), the Black Panther Party for Self Defense, the Brown Berets and the Student Non-violent Coordinating Committee.

One of Hoover’s targets was Albert Einstein.  Hoover’s campaign against Einstein included going through the physicist’s garbage, opening his mail, monitoring his phone, and trying to link him to Soviet spies in an effort to take away his American citizenship.  Even though the campaign turned up nothing, Hoover didn’t stop amassing “evidence” until Einstein died of an abdominal aneurysm in 1955.

Why was Einstein such a target?  Einstein considered racism, the staus quo in America, to be the country’s “worst disease” and said as much in a speech he delivered at Lincoln University, alma mater to Supreme Court Justice Thurgood Marshall who would go on to be a key player in the Brown versus Board of Education ruling that integrated American schools on the basis that separate is not necessarily equal.

Lincoln University was also “the first institution found anywhere in the world to provide a higher education in the arts and sciences for male youth of African descent.”

At the time—it was 1946—Einstein was in residence at Princeton University where he had been since being invited in 1933 to study at their Institute for Advanced Study and as a Jew, the invitation served as a convenient escape from the Holocaust.  He was in the Nazi’s crosshairs as a Jew who betrayed the idea of Aryan superiority.

As a rule Blacks and Jews were not particularly welcome on the campus except, as childhood resident Paul Robeson (yes, the great Paul Robeson) explained, in a status akin to that of slaves on a plantation.  Certainly, Black students were not accepted for admission because, as it was explained in a 1942 edition of the Princeton Herald, “admitting black students, while morally justified, would simply be offensive to the large number of Princeton’s southern students.”

Princeton would be the last of the Ivy league schools to integrate.

Einstein was not blind to the incipient injustice around him.  A war for equality was being fought on his home soil with the aid of Americans who were not practicing the principles they espoused.  And a walk down Witherspoon Street, the main street of the Black community in Princeton, was one Einstein recounted as evidence.  Einstein described the “injustice” and “scorn” of the “principle of the Fathers who founded the United States that ‘all men are created equal.’”

So even though he rarely gave public speeches at universities, finding the conferring of honorary degrees to be “ostentatious” affairs, Einstein agreed to go to visit Lincoln University in 1946 at the invitation of then President Horace Mann Bond, father of future NAACP chairman and statesman, Julian Bond.

As big a deal as it should have been–given the history of the University and the prestige of the “genius”–mainstream media barely covered the visit despite being avid followers of his other visits.  There is no full text of the speech in which he denounced racism as “a disease of white people” and promised “not to be quiet about it.”

Later he gave a talk on the theory of relativity.