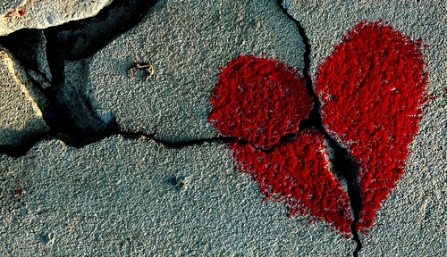 He asks me what do I have against “love” and I tell him nothing.

He looks at me like I’m a wounded puppy crying on the side of the highway in pain; his eyes are a question mark: Somebody broke your heart.

I don’t know that anybody makes it to my age without some kind of heartbreak, particularly of the romantic kind, so part of me is like, Well duh. But I save my smarty-pants response.

People do not break your heart is what I tell him instead. Your heart gets broken. Like sidewalks don’t scrape your knees. I use this analogy because I was the princess of such war scars as a kid.

Here’s how it went: The sidewalk was under your feet at one point. But somehow it ended up beneath your knee the next thing you knew.  You stumbled, fell, ended up on it in some awkward position, your knee was scraped. Either yourself or a nice mommy/figure put some peroxide on it, let it fizz all the dirt out and then put some gooey ointment or runny red mecurochrome on it, bandaged it, and you returned to play.

Here’s how heartbreak works: You hook up with some character. You get comfortable with the situation, playing and what-not, and then you hit a stumbling block: his or her breath, prying mama, life partner…and you get all skint up.

The character didn’t cause the wound! If anything is to blame, it is the stumbling block that did that.

Somebody or something like Ben and Jerry’s Cherry Garcia (although I do not know the latter from experience–wink, wink) will nurse you back to good health and spirits and you will return to play.

I guess I just don’t wanna give credit where it ain’t due. So no cutie (yeah my interviewer is ever the cutie) I never had my heart broken; nobody’s been able to make me feel that kind of terrible without my assistance.  Don’t get me wrong, I have certainly been heartbroken. I was responsible for stumbling, tripping, falling due to some of my own clumsiness or inattention.  The same way I used to try to skip over crumbles in the sidewalk with my bike and lose control of it; go too fast and swerve into the curb.  No more than it excused the city from fixing the potholes, it doesn’t excuse boys that I’ve been sad about for the stumbling blocks they put in the way.  I’m just saying.

And for the record, Cutie, I do not have a vendetta against love. Although I do have some issues with its misinterpretation, I guess that’s the way to say it, but that’s another post.

One thought on “Sidewalks Aren’t Villains; They Don’t Scrape Your Knees”